Life And Death On The Farm

It was snowing. The snow falling softly, straight down with no wind to drive it.

I stood brushing the horses. We had all the time in the world. No rush to be anywhere or get work done. Right now the work was waiting. In the next pen over a heifer struggled to give birth. With the horses I waited, watching from a distance. Ready to offer help while trying to stay out of her way.

Spring is a time of birth. New life after a cold dark winter. Giving life is not easy though, only the strong survive, both the birthing and the spring. They are harsh and unforgiving. We need to have the will to make it through in order to enjoy the warmth of summer.

The calving season has been cruel, full of death. Young lives that will never get to lay in the green grass with summer sun shining on them. The casualties add up in my head, a tally no one wants to keep.

The new born with a broken leg. Snapped in half above the knee in front. With little chance of being able to heal, the calf’s drive to live and strong will that had him up and determined to walk guaranteed he would never heel and his drive to live killed him. I sobbed over him, the cold of the barn floor burning into my hand as I held him down to finish his last bottle of milk while he fought to stand, the leg flopping sickeningly as he forced it to hold his weight. No cast or splint would hold, he would have to die to spare him more suffering. Better while he was sill so full of energy and enthusiasm than waiting until he was wore down from infection and pain.

But to take the life of something so young and so determined to live. Can there be anything worse?

The young heifer who was devotedly licking the hindquarters of her brand new calf. Only minutes on the ground he had already suffocated, she was licking the bag off his hind end while it covered his nose cutting off that first breath. I had arrived seconds too late to save him. She spent the day licking and calling to him softy.

The calf who died at a week old. Healthy one day and too weak to move the next. No medications we tried were able to help. His mom spent the next two days calling for him. She called until her voice was broken and hoarse.

Another cow had twins. To give them better feed and care we brought one in and gave it to the cow. Anything to make her stop calling. After all our attempts at adopting the calf she is still kicking it away as it tries to nurse. She wants her own calf back.

So here I stand. Waiting. Watching. Hoping to prevent another death. It’s hard to hold out until that moment when you know help is needed. To wait and let her try on her own. She was doing good though. Two feet were showing, pointing the right direction.

So here I stood among the horses. Waiting.

Then one last push. The calf was out. She had done it.

Jumping the fence I went to make sure everything was alright. The calf lay there, a puddle of after birth and bag. He was still wrapped securely in the bag that hadn’t broken during birth. His mom lay, exhausted, resting from the work she had done.

I grabbed the bag, sinking my hands into the wet slippery home he had lived in for the last nine months and yanked it back over his head. He lay still.

Had he already suffocated? Where his lungs too full of the liquids that had been keeping him alive? Would they kill him now? Usually the bag breaks and their lungs drain as they hang waiting to be fully born. I grabbed the slippery hind legs and hefted his hind end in the air. Hoping to help some fluid drain. He wiggled and jerked. His mom, thoroughly disturbed now, stood to see what she had accomplished and what I was doing with it.

I let him down and stepped back She stepped back too. Horrified by this new occurrence. Looking on in curious horror as the other heifers came to see. They wandered off. She went to investigate. Wiping my hands on my jeans I made a mental note to remember to take them off before I went inside. Then I took my curry comb to my pet cow who came over to visit.

Again, we waited. My pet leaned into the grooming. The heifer licked her calf. The calf took a watery shuddering breath. This time we would have life.

And the snow kept falling. 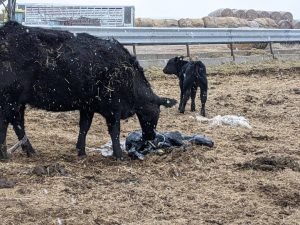