That goes without saying.

But what else do they like to eat? Cattle are actually known for being rather adventurous eaters. They can eat almost anything. Kale and bread are reported to be favorites. Apples and carrots have the same effect on cattle as they do horses. People feed their cattle anything from donuts and Oreos, to peanuts and cucumbers.

Mine are big fans of squash. We clean out the pumpkin patch every fall and throw them to the cattle. It adds interest to their diet and gives them something to keep them entertained. Almost any garden produce can be shared with cattle

Of course there are some things cattle shouldn’t eat. Fruits with large pits like peaches or avocados need to be avoided. There are plenty of foods in their pastures that are unhealthy for cattle to eat so taking care in what we offer them as a treat isn’t an unusual step in caring for cattle.

What odd treats do you give to cattle? 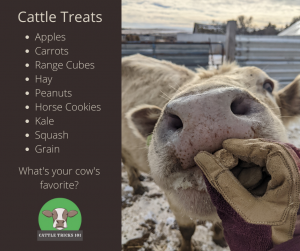